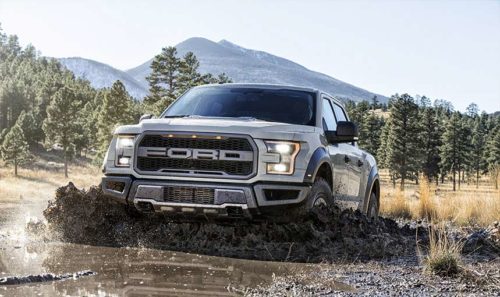 Wait just a little bit longer, and you will be able to drive the 2017 Ford F-150 Raptor around the Salem area. The newest version of the F-150 Raptor is ready for anything and truly excels off-road. Although it won’t be available until this autumn, we already know plenty of details about this upcoming pickup.

The newest Raptor has a boxed steel frame with extra reinforcement compared to other F-150 models. You will be able to choose from the SuperCab with a 133-inch wheelbase and a SuperCrew with a 145-inch wheelbase. Even with the sturdier frame, the F-150 Raptor is 500 pounds lighter than before.

Under the Hood of the Ford F-150 Raptor

If you want to drive the 2017 F-150 Raptor, then be prepared for Ford’s famous EcoBoost engine. The previous 6.2-liter V8 engine is gone, and now you get to enjoy the second generation of the famous 3.5-liter V6 featuring direct fuel injection and twin turbochargers. This EcoBoost engine was influenced by Ford’s sports cars. It has numerous improvements, such as a new aluminum block plus updates for the fuel system and cylinder heads. The new EcoBoost V6 engine will generate more power than the previous 411-horsepower, 434-pound-foot V8, but official numbers aren’t out yet.

The 2017 Raptor will be the first model to use the 10-speed automatic transmission with a 4-wheel-drive transfer case. This transfer case works together with the terrain-mode system so you can tackle any condition, from mud to snow to rocks. You will control the system with a menu within the cluster display and buttons on your steering wheel.

The exterior of the Ford F-150 Raptor is even more eye-catching than before, with more prominent haunches that help clear the beefier suspension and large tires. You get the “FORD” grille along with familiar marker lights and improved bumpers. The design on the front fender vents, front skid plate, and available bed decals have been adjusted, as well.

Stay updated with the latest information concerning the 2017 Ford F-150 Raptor by talking to the team at Berglund Ford in Salem. Visit our dealership to sign up for updates and find out how to be one of the first Virginia drivers to own the 2017 Raptor.

Disclaimer: The stock image is being used for illustrative purposes only, and it is not a direct representation of the business, recipe, or activity listed. Any person depicted in the stock image is a model.